Your cart is empty
Product is not available in this quantity.

Our crop this year was light so we searched throughout California for the best EVOO to expand our Royal Family. Hang on tight because we found 2 oils that will make you feel like Royals so go get your crown and gown.
‍
Using stricter standards than international requirements, only the best California olive oils qualify for COOC certification.  Following every harvest, we submit a laboratory analysis and this year we surpassed all COOC and USDA standards for EVOO. 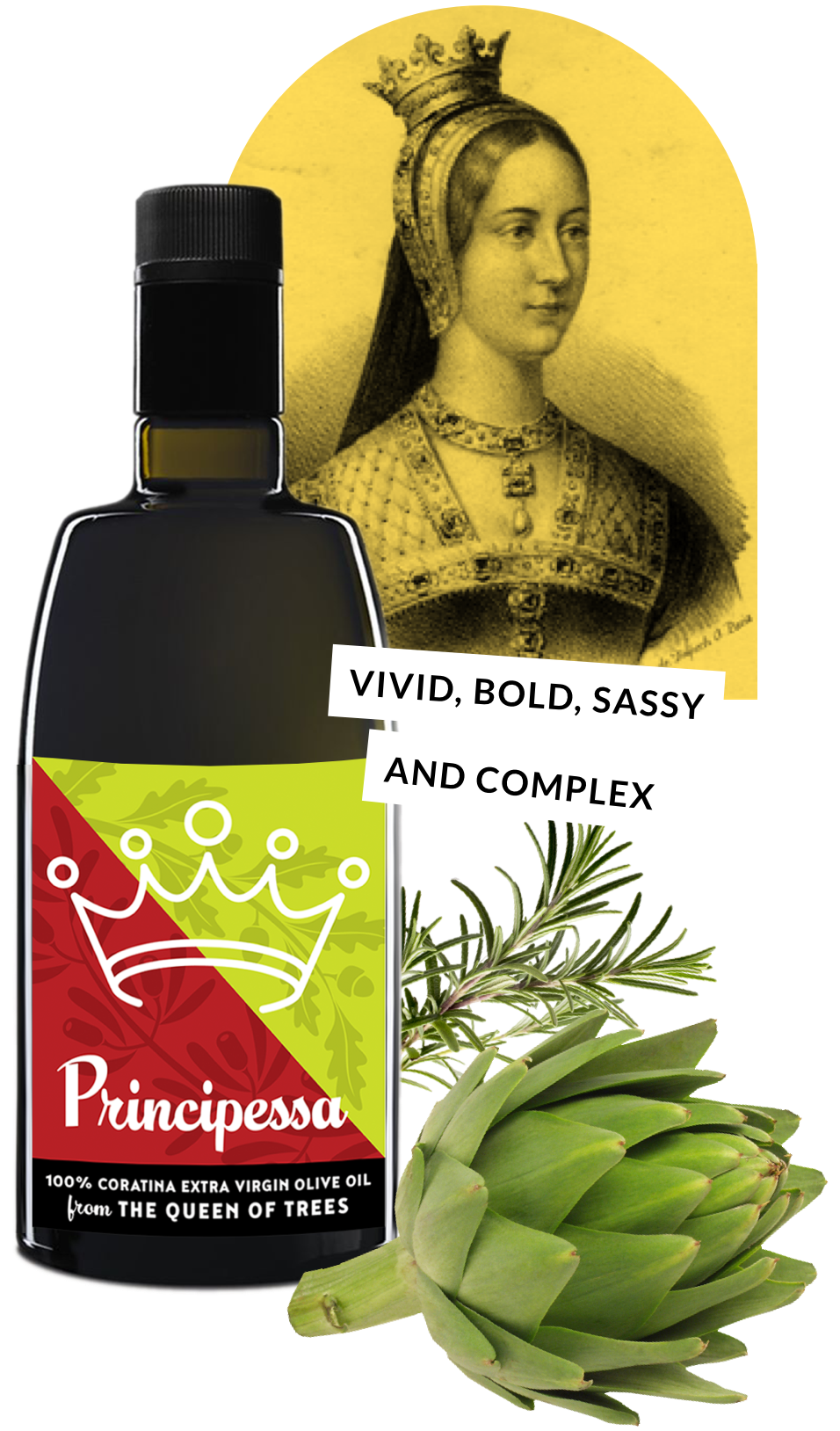 Please allow me to introduce you to 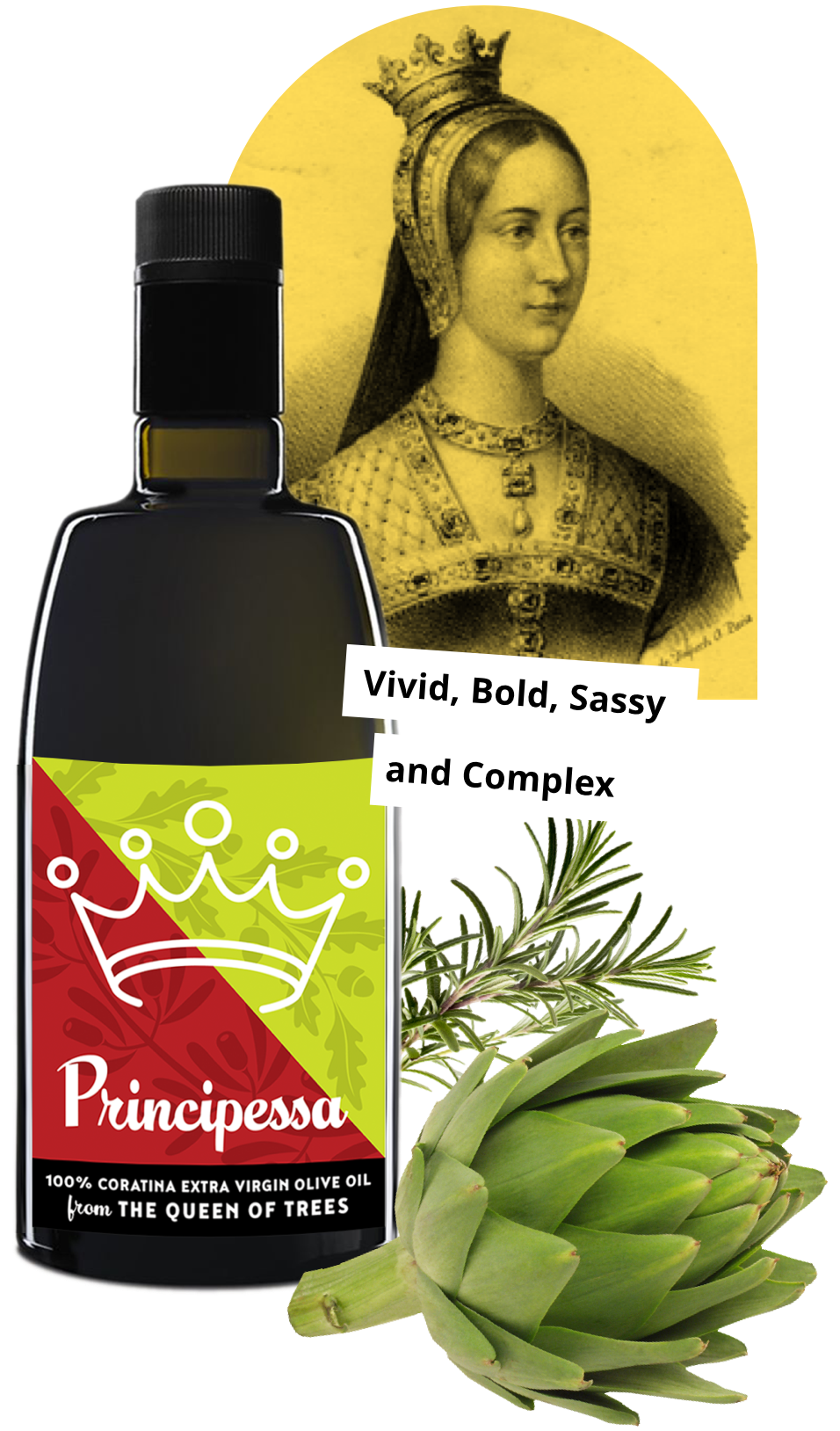 Principessa is a young, flirtatious, grassy, floral and spirited EVOO

Hand picked in California and milled in Paso Robles on December 26th, 2020.  Like a Royal Principessa, it is elegant, graceful, a little naughty and can pack a powerful, peppery punch on the back of your palate.

A spoonful of Principessa a day

Principessa is 100% Coratina, a highly sought after olive from the Puglia region in Italy because of the high polyphenol content and long shelf life.  Many Italians take one tablespoon a day as a nutritional supplement and to nourish their skin (yes…some folks rub a little on their skin for extra moisture and sparkle).

You’ll taste hints of artichoke, chicory and almond and rosemary.

Dribble a little on your pasta, pizza, roasted vegetables, soups or use it as a finishing oil on your savory meats or stews.  For a guilty pleasure, drizzle Principessa on your favorite toast and a pinch of flaky finishing salt....Bellissima.
‍
Curtsy first and then let Principessa do her royal thing. 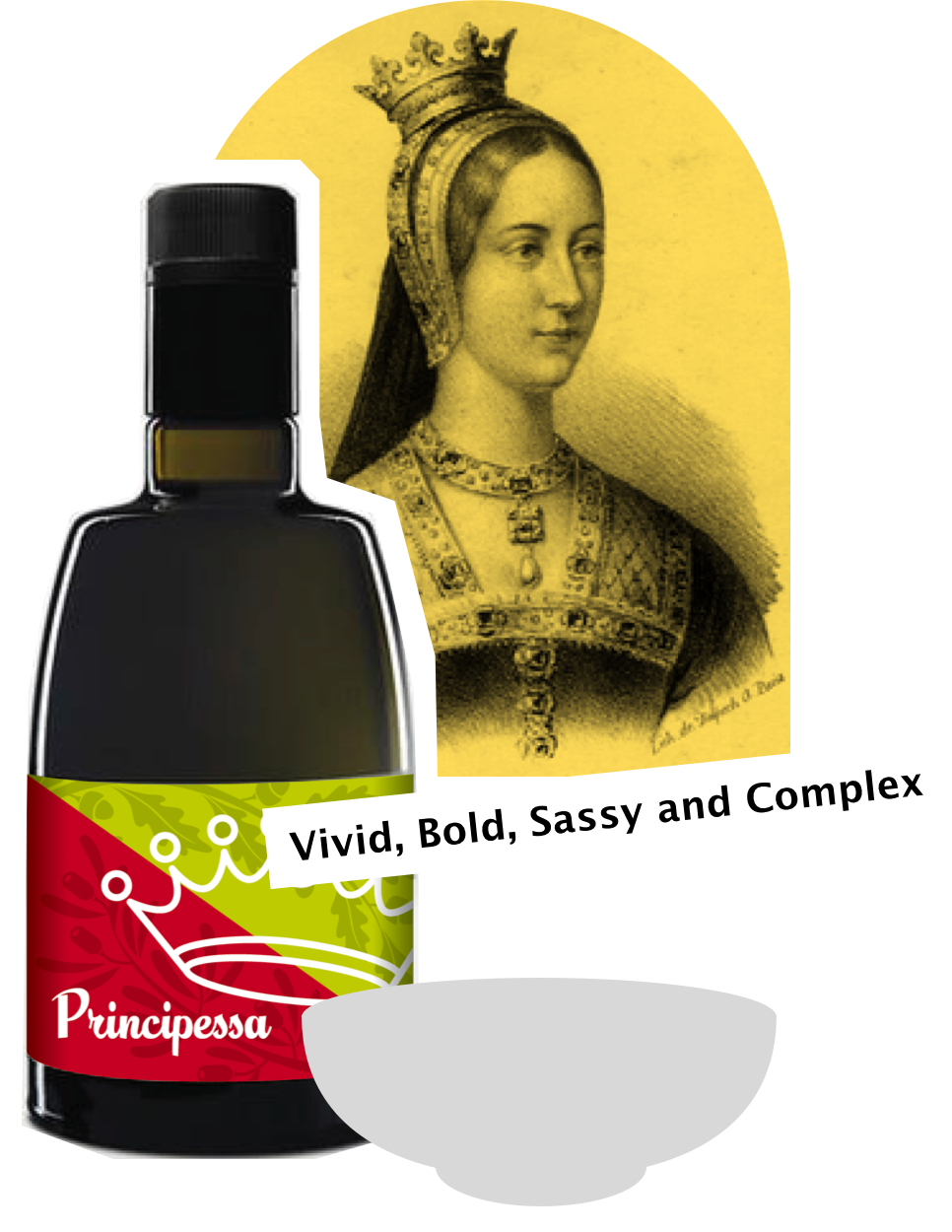 And now to her Royal, Spanish lover 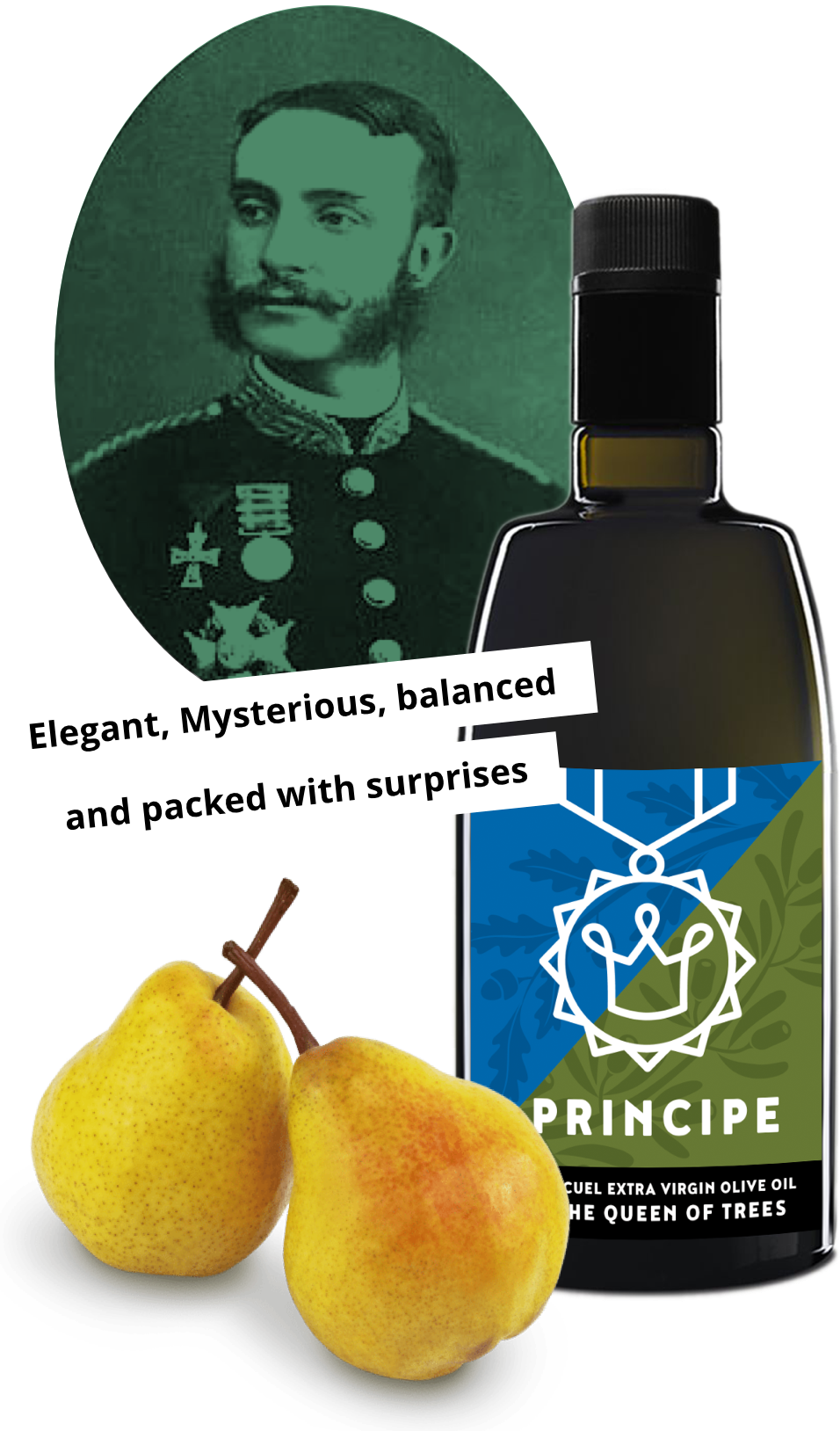 Picual is an olive cultivar from Spain but these olives are grown in California, handpicked and milled on December 26th, 2020.  You will fall in love with this dark, handsome prince and in return, he will protect your heart.

Over the top, crazy healthy. SERIOUSLY.

High in monounsaturated Oleic acid contributes highly to the prevention of cardiovascular disease.  The peppery taste is often associated with the amount of antioxidants or polyphenols found in the olive’s oil and the antioxidants help to keep cells healthy.  All good stuff.

"Fruity with pear notes.  Smooth, creamy mouth feel with pungency in the palate as a finish."

‍Our strong Principe takes a long time to break down at high temperatures so you could use it for frying meats or veggies or for stews, soups.   However, it has such a spectacular flavor that a few drops on toast for breakfast with a pinch of salt is a great way to start the day. At lunch, splash some on Brushetta, for dinner, drizzle some on your Salmon fillet and finish off the night with a dash on your vanilla gelato. 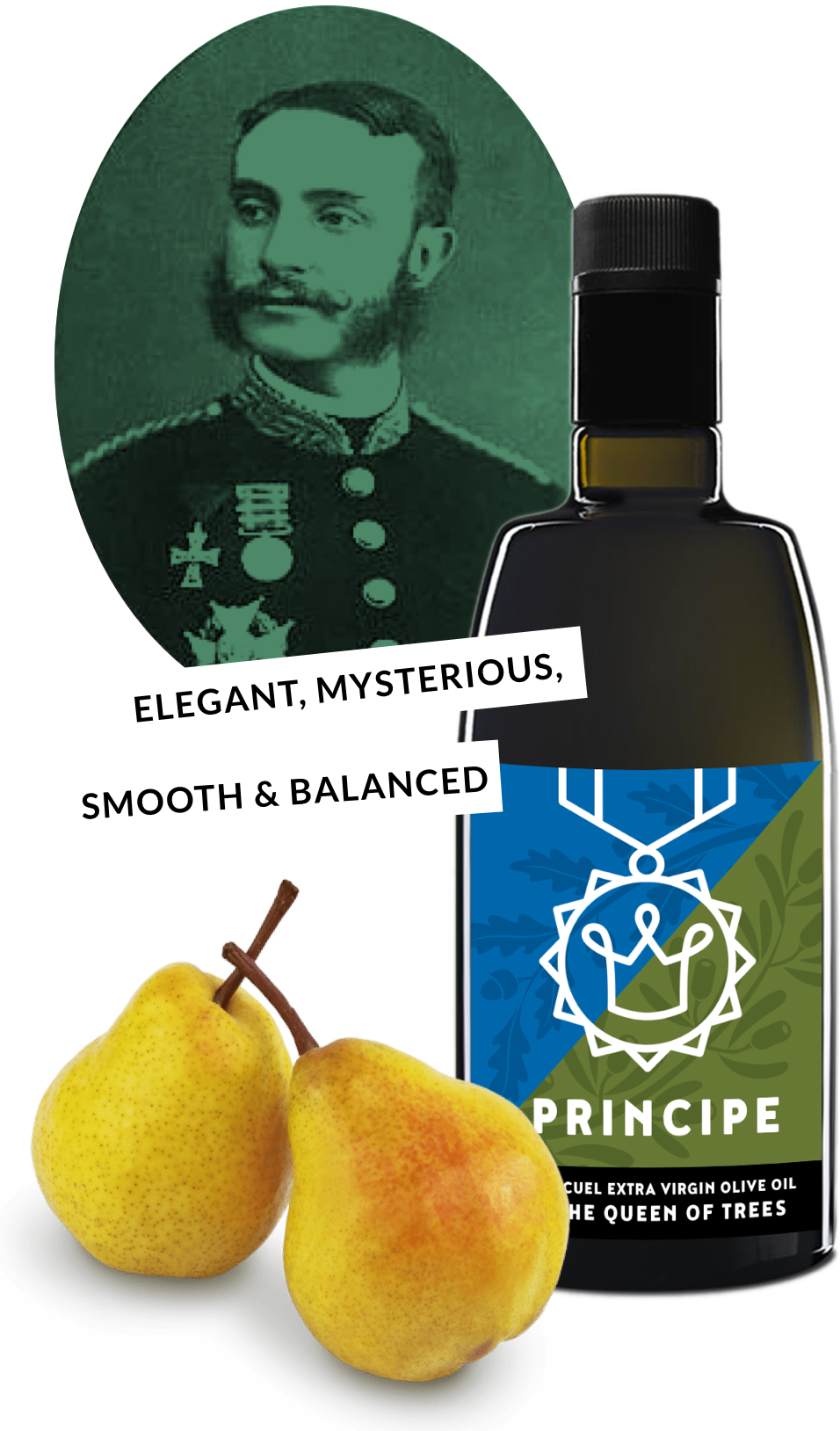 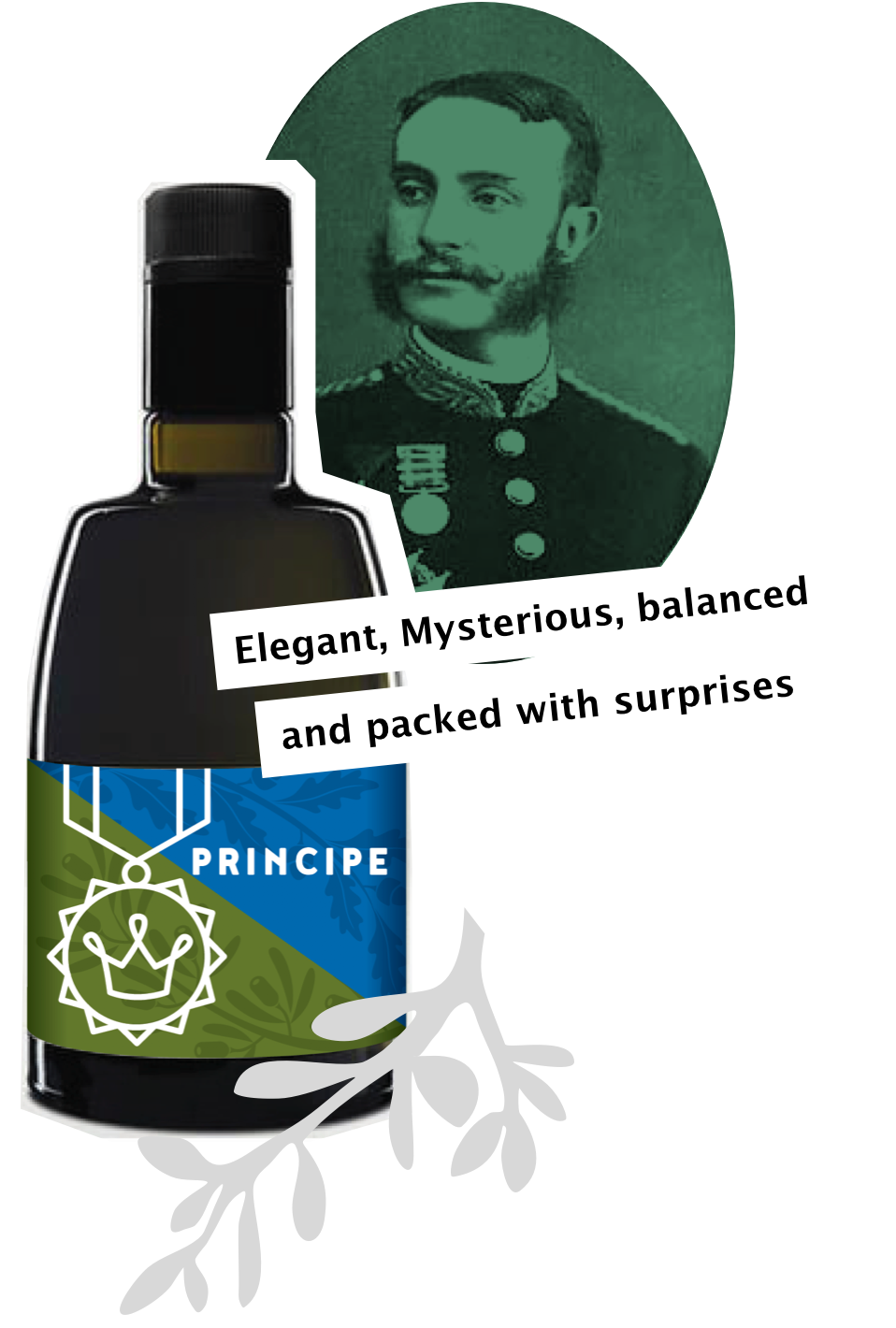 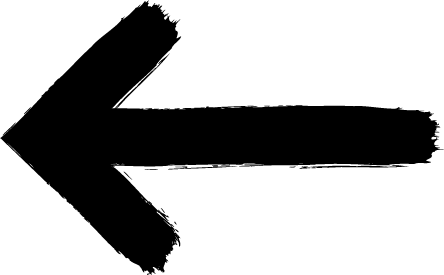